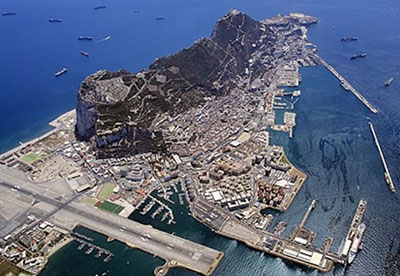 Gibraltar Airport (IATA: GIB – ICAO code: LXGB) is located very near the city centre, not more than half a kilometre. The access is a bit special since to enter the territory of Gibraltar you have to cross at the same level the runway where the planes land and take off, although today the entrance is enhanced by the construction of an underground tunnel.

This runway is nearly 1830 metres long and is operational for commercial flights since 1987, remembering that the purpose of the construction during World War II, opened in 1949, was exclusively for military use and as emergency basis for the UK

The major airlines operating at the airport of Gibraltar are: British Airways (BA), American Airlines, Monarch and Easyjet. The destinations are Liverpool, London airports Gatwick, Heathrow and Luton; Manchester and East Midlands. The airport records an annual passenger traffic that ranges between 300,000 and 330,000. 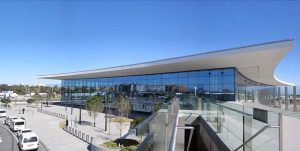 By mid-2012 was inaugurated the new airport terminal with an area of ​​over 20,000 square metres, and with plans for further expansion to accommodate more air traffic in the future of Gibraltar airport.

Economy taxis offers a comfortable and safe means of transport between Gibraltar airport and any destination in Andalusia or the Costa del Sol. No matter the number of people who accompany you, Economy transfer has vehicles with 4 seats, for 7 persons, minibuses with 12 and 19 seats and buses with a capacity of up to 54 passengers.

The territory of Gibraltar

Also known as the Rock of Gibraltar, the area is widely considered an attractive place for its immense mountain inhabited by a considerable amount of wild monkeys. Gibraltar attracts much tourism due to the great trade offer taking place in the city, with its many shops and establishments in its popular Main Street.

In addition, the Rock hides tunnels of the Second World War and caves that can be visited; know more about Gibraltar and its charms by clicking here.

Interesting places near the airport

If you are interested in visiting other places near Gibraltar airport, we recommend Estepona just half an hour away, Marbella 45 minutes away, Sotogrande, La Linea de la Concepcion (500 metres away), Jerez de la Frontera or Cadiz.